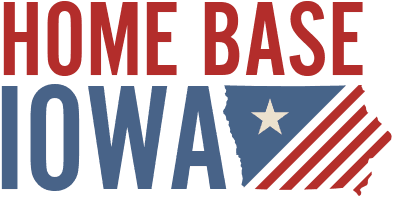 Through their service, veterans have already proven they share the values we hold dear as Iowans - hard work, leadership, and patriotism, among others. Home Base Iowa allows veterans to find the right job for them in Iowa, and to become a part of our communities.

Governor Terry Branstad congratulated the community of Grimes, Iowa, on achieving the Home Base Iowa Community designation. The designation was given to Grimes at an event attended by Governor Branstad at the AmericInn Lodge and Suites in Grimes.

Home Base Iowa connects transitioning military members and veterans with career opportunities in Iowa companies. The state of Iowa has a lot to offer veterans and transitioning service members including no state taxes on military pensions, a cost of living below the national average, and one of the lowest unemployment rates in the nation. To date, members of the Iowa Business Council, Iowa's largest employer, have hired more than 1,300 employees through Home Base Iowa.

In support of the local Home Base Iowa initiative, and military veterans in general, the Grimes City Council adopted valuable incentives aimed toward the recruitment and retention of veterans of the United States military.

Veterans will receive a one-time voucher valued at $250 that may be used to offset the cost of Building Permits, Park and Rec Programs, and Pet Licenses. This voucher is nontransferable and will not be reissued if lost or damaged.

To take advantage of these benefits, veterans must register with the City of Grimes. Veterans must be active duty, reserve, or honorably discharged. Proof of veteran status is required. Acceptable forms of proof include a DD214 form, Iowa driver's license with veteran designation, or military ID card. If a veteran is deceased, the veteran's immediate family may still receive these benefits.

If you are an existing beneficiary of the previous property tax rebate program in Grimes and are listed as the owner prior to January 9, 2019, your property tax rebates of up to $1000 per year for 5 years have been grandfathered in.

Do you have questions about Home Base Iowa and how to get involved? Please contact Grimes City Hall at 515-986-3036.